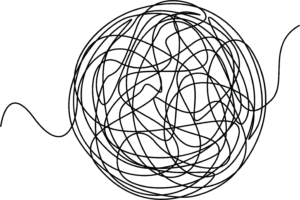 An extract from The Flow System: The Evolution of Agile and Lean Thinking in an Age of Complexity.

Complexity occurs in agents, organisms, and systems in different ways, at different times, and at various levels of analysis.

Complex problems originally was identified by Churchman (1967) when discussing simple, complex, and wicked problems. This distinction of problem classification had carried over to three distinct types of problems:

Type 1 problems represent simple problems and are defined as having consensus on the problem and solution.

Type 2 problems are complex problems that have an agreed upon problem but no agreed upon technique to solving the problem.

Type 3 problems represent wicked problems in which neither the problem nor the solution can reach any consensus on what the problem is or how it can be solved. (Roberts, 2000)

Indeterminacy in problem formulation the precise formulation of a wicked problem as a problem with unique and determinate satisfaction conditions is virtually impossible because the values and interests of concerned and affected parties are diverse, often in conflict with one another, and change over time and across generations.

Nondefinitiveness in problem solution a rigorous and ultimate solution to a wicked problem with definitive results is unattainable because neither the problem nor the repercussions of its solution are determinate.

Nonsolubility wicked problems can never be solved because of the first two characteristics. Unlike “tame problems” that are determinate with clear goals(s) and a definite set of well-defined rules (like those in mathematics, engineering, and chess), and are thus ultimately soluble (eliminable), wicked problems may be suppressed or even overcome, but cannot be eliminated. In different and often more wicked forms, they will recur.

Irreversible consequentiality every implemented solution to a wicked problem is consequential, often triggering ripple effects throughout the entire socioecological system that are neither reversible, nor stoppable.

Individual uniqueness despite likely similarities among wicked problems, there always is one or more distinguishing property of overriding importance that makes an individual problem and its solution(s) essentially one-of-a-kind .

There are therefore no classes of wicked problems, nor immediately transferable solutions. (Xiang, 2013: 1)

When viewing simple or complicated problems, it is easy to break down the problem into simple microproblems. By attacking each microproblem, one can combine the results to get to the initial problem. These practices typically work well with simple or complicated problems because the problem, and the variables, can be defined and measured. In addition, different techniques for solving the problem also can be identified.

For simple and complicated problems, these reductionistic techniques, breaking problems into subproblems, have been with us for some time and have become one of the more common practices used in research. Reductionistic methods identify correlations between variables and highlight which variable could be affecting other variables. Hypothesis testing is conducted and symmetric relationships are identified from the analysis. These symmetric relationships are often the result of statistical tests (e.g., analysis of variance, ANOVA; multiple regression and correlation, MRC; structural equation modeling, SEM) in which one or more independent variables (IV; X1, X2, X3) are found to be associated (either positively or negatively) with a dependent variable (DV; Y).

Unfortunately, results from such hypotheses testing have been identified as having multiple problems, such as not being normally distributed (symmetrical), having an inadequate sample size, being a cross-sectional design (only one point in time measurement), or making the results invalid or irrelevant because the tested theoretical model is ill-defined. In addition, “offering hypotheses and testing for symmetric relationships alone is usually insufficient for understanding, describing, and predicting relationships between simple/configural X and simple/configural Y relationships” (Woodside, 2017: vi). A better explanation, understanding, or sensemaking is needed here: “What is needed in science is not just facts but relevant facts” (Chalmers, 2013: 25).

These reductionistic practices have been shown to provide only a paucity 2 of understanding. Although providing some knowledge and understanding of the world around us, they do, however, have their limitations. The main issue, when viewing complex problems, is that complexity does not occur in a vacuum, and boundaries cannot be placed around the problem to test the hypothesis in real time. Other issues include the fact that complexity is nonpredictable and unexpected outcomes can occur.

John Turner, Nigel Thurlow, and Brian Rivera. The Flow System: The Evolution of Agile and Lean Thinking in an Age of Complexity.